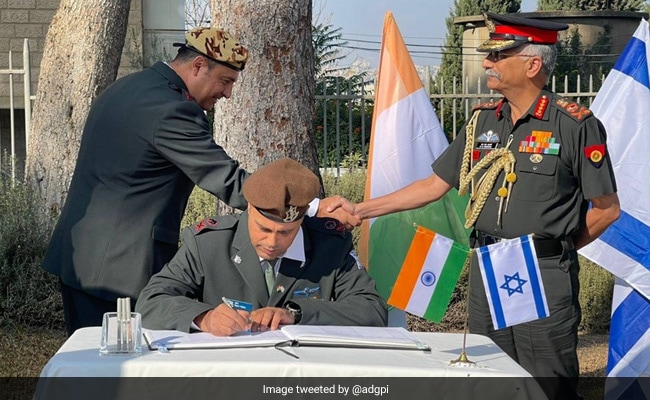 Indian Army Chief of Staff General MM Naravane, during his five-day visit to Israel, on Thursday visited Indian Soldiers War Memorial in Jerusalem, laid down a wreath and paid tribute to the Indian army personnel who lost lives during World War I.

“General MM Naravane #COAS laid a wreath at the Indian Soldiers War Memorial in #Jerusalem and paid tribute to the #Bravehearts of #IndianArmy who made the supreme sacrifice during World War I,” the Additional General Directorate of Public Information, Indian reported. Army in tweet.

General MM Naravane #KOAS laid a wreath at the Indian Soldiers War Memorial in #Jerusalem & paid homage to the #Bravehearts of #IndianArmy who made the supreme sacrifice during World War I.#IndiaIsraelFriendshippic.twitter.com/3tFg85Rqcw

General Naravane, on Monday on the first day of his inaugural visit to Israel, received the country’s honorary guard. Later that day, he paid a visit to the Israel Defense Forces special operations unit, where he was briefed on aspects of the conduct of counterterrorism operations.

The army chief on Tuesday visited the northern border of the country, where he was briefed by Israeli troops on land and border management. On Wednesday he visited the headquarters of the Israeli Defense Forces and the War Memorial on Indian Soldiers in Jerusalem the next day.

The Ministry of War, in a statement, said the army chief will promote the excellent bilateral defense cooperation between Israel and India through numerous meetings with senior officials of the security establishment and exchange views on various defense-related issues.