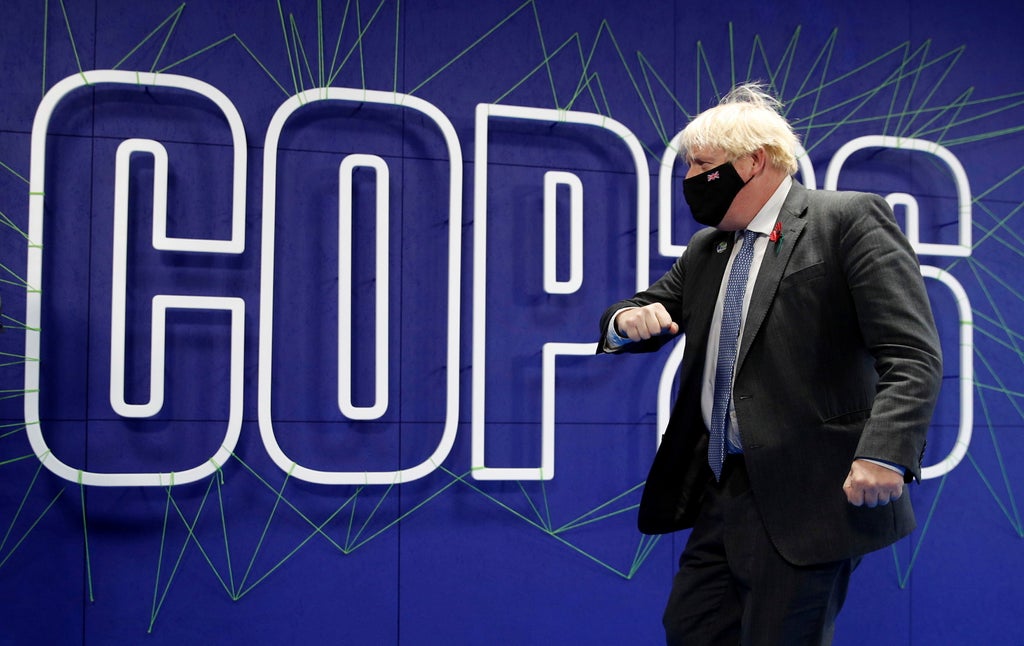 A new draft of the final deal, which could come out of Cop26’s climate summit, seems to have blunted its call to curb fossil fuels, but has not removed any mention of the need for their removal, as some observers feared.

The first draft of the possible Glasgow pact released on Wednesday called on countries to “accelerate the removal of coal and subsidies for fossil fuels”.

Published in the early hours of Friday morning, the new draft instead calls for “accelerating the removal of incessant coal power and inefficient subsidies for fossil fuels.”

The texts from Glasgow are the first UN climate articles to make specific mention of fossil fuels. Some observers have suggested they will not survive the rounds of intense negotiations between the 197 countries.

Friday is the last planned day of the UN climate summit in Glasgow, where nations have come together to keep hopes of limiting global warming to 1.5 ° C above pre-industrial levels by 2100.

Meeting the 1.5C target, the aspiration of the major Paris Agreement, could be key to curbing further climate impacts around the world.

The first draft of the Cop26 final agreement “urged” all countries to “revisit and strengthen” their climate promises for 2030 to give the world a better chance of keeping temperatures at 1.5C.

It came after a stern analysis published on Tuesday warned that even when pledges agreed at the Glasgow summit are considered, global greenhouse gas emissions in 2030 are likely to be twice as high as what would be needed to meet the 1.5C target.

However, the latest draft seems to weaken its call on countries to expand their pledges for 2030.

Instead of “encouraging” countries to come up with tougher plans, it is “asking” them to do so. According to the UN, this is a less instructive language.

A new mention of “methane” transformed it into the latest draft of the Glasgow pact. The new text calls on countries to “consider further actions” to reduce non-CO2 greenhouse gases this decade, with specific mention of the potential pollutant methane.

The opening statement of the Glasgow pact now also makes specific reference to the role of children in demanding that leaders act.

The new draft has strengthened wording and provided a specific timeline for increased climate finance, one of the main demands of developing countries and small island states that are already facing severe and deteriorating effects.

The text now “encourages” developed countries to “at least double” climate finance for developing countries by 2025.

The draft now also acknowledges “with deep regret” that developed countries have not fulfilled promises made first in 2009 to provide $ 100 billion a year to help poorer nations help them reduce their emissions and adapt to worsening climate impacts.

The recognition of the failure of rich nations to meet the $ 100 billion was a “specific request from poor countries,” according to Mohamed Adow, director of the energy and climate think tank Power Shift Africa.

Jennifer Morgan, executive director of Greenpeace International, said the latest draft text “could be better” but there are elements “worth keeping”.

“The key line on removing coal and fossil fuel subsidies has been critically weakened, but it still exists and needs to be strengthened again before the close of this summit. That will be a big struggle and we must win,” she said.

“But here is a wording that is worth keeping and the UK Presidency has to fight with nail and tooth to keep the most ambitious elements in the deal.

“We have moved from richer nations largely ignoring developing countries’ demands for pledged funding to tackle climate change, to the beginning of recognizing that their calls should be met. Now we need developed countries to expand their offer of support and funding.”

Dr Jennifer Allan, Lecturer in International Relations at Cardiff University, added that the new sketch was, on the whole, “much more balanced between the views of developed and developing countries.”