Imagine that one day you are walking down the street and then you see Aladdin on his magic carpet, you will surely be surprised .. This is what happened to the people of Dubai.

One morning, residents of Dubai were surprised to find a man walking around on his magic carpet dressed in an Aladdin costume, leaving the city’s residents confused.

What added to their confusion was seeing this person walking with his magic carpet over the water in a video that was circulated on the media, so what’s the truth about this thing?

American content creator Mark Dutton, known as “Rhyz,” explains the truth of what happened, saying that one day he had this idea, which is to ride the “magic carpet” over water like Disney’s fictional Aladdin using an electric skateboard, in an interview with CNN website.

The original idea for Rice was inspired by American content creator Jesse Willens, who roamed the streets of New York City on a “magic carpet” using an electric skateboard.

To add a touch of magic to the idea, Rice contacted his girlfriend, a fashion designer in Dubai, who along with her team designed and produced a costume that resembled the costume of Prince Aladdin from the animated film Aladdin. 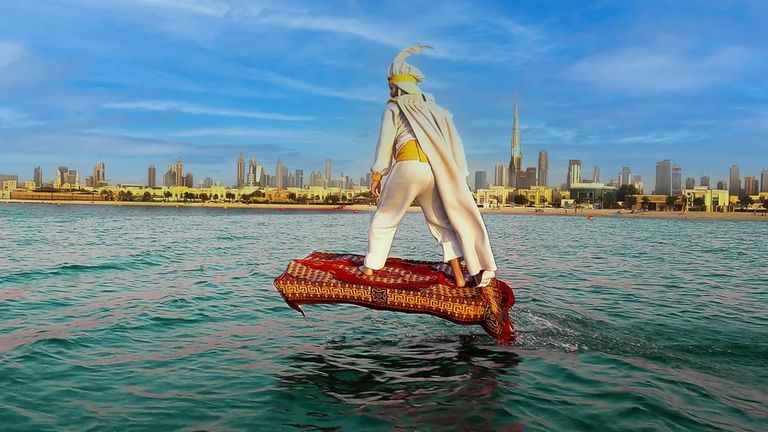 Reyes, who lives in Dubai, has decided that the best time to show the video on his social media is Halloween, October 31, 2021.

During the video, Rise tours the Gold Souk area and flies over the waters of Sorrow Beach in Dubai on his magic carpet.

Rays explains why he chose the gold market, saying it is the largest gold market in the world because it attracts tourists and is a brand for the UAE.

And as for the reason for choosing to fly over the waters of the “Sorrow” beach in Dubai, he points out that it was the ideal choice as there were not many waves compared to the waves of Jumeirah Beach.

As for the craziest and hardest part, says Rays, it was the second half of the video, a “magic carpet” flying over the water surface, using an E-sheet, and in addition some help from computer-generated imaging (CGI) technology. To exit as the video shows.

Riding on an electric skateboard was pretty hard, Rice says, and the Aladdin costume and magic carpet made it even harder.

And about the reactions of passers-by in Dubai, Rays explains that people couldn’t believe what they saw literally because some stopped to watch it while others photographed and recorded videos.

As for the resonance the video achieved on social media, Rice explained that it didn’t differ much from the reactions of passersby on the street.

The video garnered thousands of views and many comments such as “Amazing” and “Super cool”, in addition to questioning how the magic carpet was made.